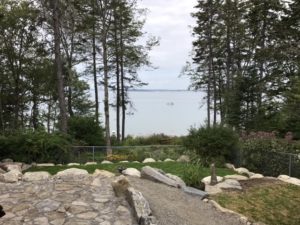 My father spent the last few months of his life at the Vicarage.  I only wish we’d found this amazing place sooner.  He had been living in a fairly large “retirement village,” which attempted to support him, but did not come close to providing the caring and connection that the Vicarage was able to bring to his life in a very short time.

I knew when I arrived at this beautiful place for the first time that it would be a good fit for him. Shortly after settling in, the highly observant staff quickly realized that he had been overmedicated in his previous setting. He was carefully weaned from the bulk of the unnecessary drugs and his awareness and overall personality was noticeably improved. Their wholistic, home-like environment allowed him to be treated with respect and dignity. He was able to adjust to his new environment with ease and even the expected adjustment “bumps” were met with understanding and patience.

Each time I visited, I noticed not only his increased level of comfort, but also my own. When I visited him at his previous residence, I was always preoccupied with checking up on his services, his medications, his lost hearing aides, informing the frequently changing staff of his needs, etc.. I rarely had any “real” time to just sit and be with him. While my visits to the Vicarage were less frequent due to the distance from my home, the time I spent with him was of much greater quality and filled with a sense of peace. We would often sit on the deck watching hummingbirds zipping around feeders, smiling at Johanna’s little girl as she sweetly passed through the rooms, or just hanging out. These are the warm, precious memories that his time at the Vicarage have allowed me to hold onto.

I will be forever grateful for this peaceful ending to my father’s life.  Kim Heist