Understanding Dementia: What is dementia?

Dementia is a syndrome that comprises any number of different symptoms that people live with.  The most common symptom people associate with dementia are challenges with memory and confusion, but it can also include challenges with physical ability and movement, the use of language, control of emotions and communication. Cognition controls the ability to breathe and swallow;  these are body functions often taken for granted.

Is there a difference between dementia & Alzheimer’s disease?

Yes, dementia is not the disease, but rather a syndrome caused by various disease pathologies.

At The Vicarage, we teach people to think of dementia as a wide umbrella encompassing many characteristics resulting from various progressive, neurological diseases, such as Alzheimer’s disease, Dementia with Lewy Bodies, Pick’s disease, Korsakoff disease (caused by alcohol misuse), Parkinson’s disease or Huntington’s disease. With our nation’s population now living longer and longer, we are seeing an increase in diagnosis.  “After the age of 65, the risk of developing Alzheimer’s disease doubles approximately every five years. It is estimated that dementia affects one in 14 people over the age of 65 and one in six over the age of 80.” https://www.alzheimers.org.uk/site/scripts/documents_info.php?documentID=102 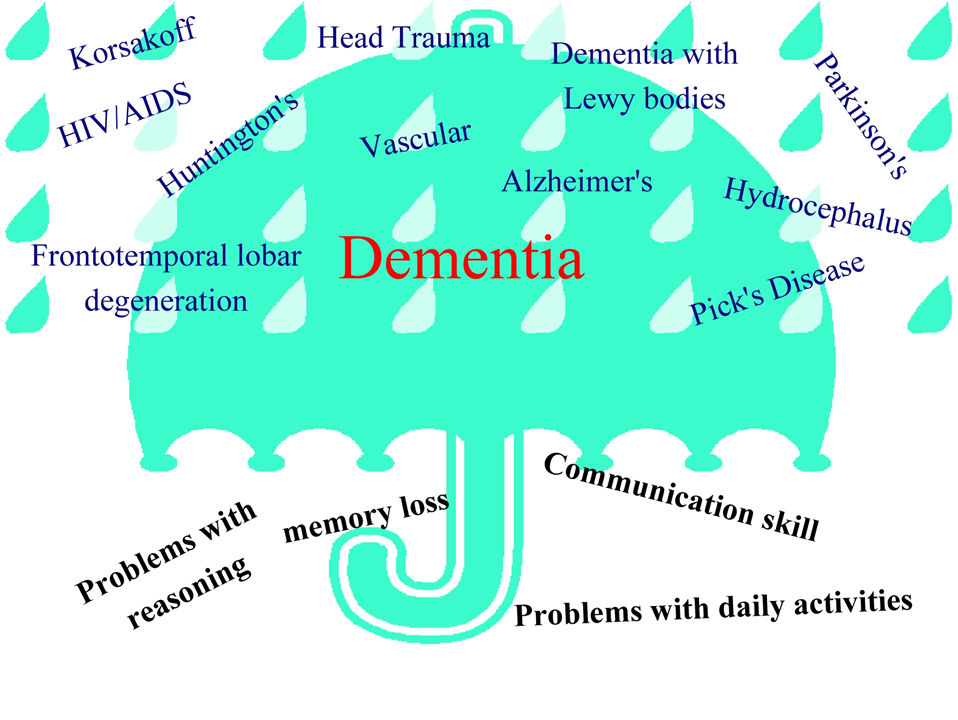 How is someone diagnosed?

When someone is experiencing symptoms, these progressive, neuro-degenerative illnesses may be difficult to differentiate.  These diseases all affect the same thing – brain function. It’s challenging and problematic in terms of care and those in the medical profession are not finding easy answers, or cures.

A patient who presents with symptoms known to Parkinson’s disease will likely be run through a gamut of testing.  If it is  Parkinson’s disease,  testing indicators reinforce the diagnosis and medication for that disease is administered to address symptoms. After a battery of testing, another person with similar dementing characteristics, who doesn’t have a clear clinical diagnosis, may, by default, end with a diagnosis of Alzheimer’s disease. A new study suggests Alzheimer’s disease  emanates from more than one mechanism and is a collection of diseases that should be classified and treated separately. http://www.alphagalileo.org/ViewItem.aspx?ItemId=158059&CultureCode=en

Are there differences within Alzheimer’s disease itself?

Looking at the research of Peter Whitehouse and his colleagues, current theoretical and medical discussion on Alzheimer’s disease recognizes it is not a singular diagnosis.  There are different variations  creating a spectrum on which people fall. Can they have similar characteristics of dementing behavior? Absolutely, but as their disease manifests, individuals fall into various arenas of diagnosis.

Is there a cure for Dementia?

We are finding the more we learn about dementing illnesses, the more ambiguous they are.  While the progression of some illnesses, such as vascular illnesses, Parkinson’s and some Alzheimer type disease, can be slowed, few dementing conditions are cured.

Most types of dementia cannot be cured and will gradually cause more severe problems.

But there are important exceptions, including dementia caused by vitamin and thyroid hormone deficiencies, which can be treated with supplements.

Some causes can be treated surgically – for example, some brain tumours, excess fluid on the brain (hydrocephalus) or head injury.”http://www.nhs.uk/conditions/dementia-guide/pages/dementia-treatment.aspx

A type of dementia is related to poor nutrition and a lack of certain vitamins and minerals, sometimes seen in the elderly.  People who have not been eating properly will get confused and act as if they are living with one of these illnesses, when in fact it’s a situation that can be reversed. By identifying the deficit and then planning a proper, fully-rounded nutritional diet, you sometimes see people rebound.

In the United States, a tremendous amount of time, energy and money is devoted to “finding a cure.”  Unfortunately, people living day-to-day with these illnesses are struggling to get proper care. As a society, equal energy should be channeled into specialized dementia care and finding a cure. After 30 years and billions of dollars, our understanding of progressive neurological illness may be improved, but our quest to find a cure is unfulfilled.

How can one cope with a dementia diagnosis?

Our society views dementing illnesses with fear. As someone whose life passion has been to care for those living with dementia, I work hard to lessen that fear and support families with hope. Our philosophy of normalizing dementia and living in a loved one’s reality rather than forcing them to live in ours, creates a foundation for good care.

While I do hope cures will someday end dementing illnesses, I live today to help families and their loved ones not feel hopeless when faced with a dementia diagnosis. I read an article recently that touched my heart, Why I’m not afraid of Alzheimer’s (and what I’m really afraid of). I encourage everyone to read it.  It speaks to the social support network needed for individual’s living with dementing illnesses in our society.

Published on Dec 22, 2014
This film from The dementia guide looks at the changes that might need to be introduced to live as well as possible with dementia. Contents include having a positive outlook, coping with memory loss, keeping safe at home and being active and staying healthy. People living with dementia and Alice Moody, Occupational Therapist, discuss life after a diagnosis”

What are trusted resources for dementia information & support?

There are good resources available. It helps to have to have a full perspective of what your needs are and then do a thorough investigation of the resources.

The Alzheimer’s Association is a good resource that is working hard to find a cure, but also putting some money into caring for communities, families and individuals.  Much of their focus is medicalized.

The Alzheimer’s Foundation focuses on medical and social aspects and needs of those diagnosed with dementing illnesses.

The United Kingdom has excellent resources for this population and is more progressive than the United States in their social care.  They are creating and fostering whole communities of care for those living with dementia.

In the UK, “the Social Care Institute for Excellence (SCIE) improves the lives of people who use care services by sharing knowledge about what works.”

In the United States, “Dr. Thomas is internationally known for his health care system innovations. He is the founder of a global non-profit (The Eden Alternative) and creator of The Green House Project, radical new approaches to reform long term care. Dr. Thomas also developed the Senior ER model of care and is now working to transform the acute care services provided to elders.” http://changingaging.org/

“TheMythofAlzheimers.com  is a web site based on the book written by the internationally respected, Peter Whitehouse, MD, Ph.D, and his co-author, Daniel George, Ph.D., an Assistant Professor at The Penn State College of Medicine. Here, the authors support a growing community devoted to humanizing the way we think about brain aging, strengthening the care and solidarity we provide to persons affected by memory loss, and learning how we can best protect our own aging minds and the minds of our young.”

http://mindsetmemory.com/  “At Mindset Centre for Living with Dementia, we are changing the story.

Instead of saying “goodbye,” we say “hello.” Changing the story of dementia—from one of deficits, loss, and disability to one of gain, ability, empowerment, value and purpose—will refocus our answers to the impact of dementia on our world and provide a framework for our actions.

By changing the story–by choosing to empower people with dementia to live engaged, purposeful, social, healthy lives–we can change the caregiving experience, how people with dementia are accepted in and enabled by our communities, and extend the time before they require long-term care, saving our health care system billions of dollars in the process.”

The Vicarage by the Sea was founded in 1998, with the desire to create a difference in the lives of those living with dementia. Our philosophy believes that every human being deserves the opportunity to grow, regardless of age or ailment. The Vicarage setting creates a culture of dementia by embracing and respecting the individual reality of each person who lives with us.  Staff honor the residents’ experiences. The normalization of dementia experience is what defines The Vicarage culture, creating an environment where social stigmas regarding dementing illnesses are lessened.  Such normalization allows for continued growth and preservation of residents’ dignity and the continued development of personal relationships among family, peers and staff.

We hope that this Q&A is helpful and encourage individuals to contact Dr. Wigg via email at jwigg@thevicaragebythesea with further questions or commentary.

Johanna provides professional counseling to families in transition. She meets with families and their loved ones regularly. She lives at The Vicarage and works hands on with each resident, giving her a thorough understanding of each resident’s needs. She does regular assessments on each resident to ensure that they continue to receive the personalized care they deserve and need.