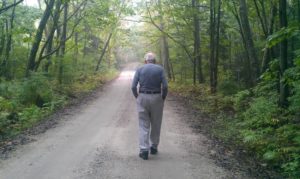 World-renowned art critic Hilton Kramer walks a path while living at the Vicarage by the Sea, a residential home in Harpswell that takes an unusual approach to caring for people with Alzheimer’s disease and other forms of dementia. Kramer died March 27 at 84.

HARPSWELL — Hilton Kramer, considered by many one of the most incisive art critics in the world, spent his final months at The Vicarage by the Sea, a residential home that provides care to those with advanced dementia.

Kramer’s wife, Esta, speaking just days after he died at age 84 on March 27 of a rare blood disorder, praised the Vicarage.

“I just think it’s the most extraordinary place,” she said.

The story of how the Vicarage took an aging art critic and provided him with a measure of peace is also extraordinary.

“The essence of who individuals are is not altered by Alzheimer’s,” said Johanna Wigg, who founded the Vicarage after caring for her grandmother.

Wigg said the mainstream medical establishment places too much focus on minimizing behavioral differences caused by dementia, and reducing costs in institutional environments.

That approach, she said, is a recipe for disaster, leading to patients trapped behind locked doors and medicated into stupor.

By contrast, the Vicarage, set in the rugged, windswept beauty of Harpswell’s rocky coastline, has an approach to care so different from the norm, that an intellectual outsider like Kramer could hardly have failed to appreciate it.

At the Vicarage, a residential home that accommodates just eight people at a time, behaviors are embraced.

And if someone develops a desire to kiss the hands of all those he encounters, as Kramer did, the Vicarage doesn’t try to quash that desire with medication.

Before Kramer moved into the Vicarage last June from their home in Damariscotta, his widow said, his disease had advanced to the point where he rarely spoke.

The man who founded the intellectual magazine New Criterion, and who had served as the chief art critic of The New York Times, had lost all interest in his field.

Institutional options, she said, didn’t seem in keeping with the individuality that Kramer advocated throughout his life.

While under the care of other facilities, Kramer had been heavily medicated. He rarely interacted with anyone, hardly slept, gained more than 30 pounds, and had reduced mobility.

When Esta Kramer saw The Vicarage by the Sea in a phone directory, she planned a visit.

“I instantly fell in love with the place,” she said.

One of the things that appealed to her was the artwork that the Vicarage had on display. In fact, Wigg’s grandmother, Peterson, was herself an artist.

The shelves of the Vicarage are full of Peterson’s sculptures; as her Alzheimer’s progressed, her sculptures became distorted and have become a physical testament to the difference in perception that a person with Alzheimer’s can experience.

Under the care of Wigg and her staff, Kramer began to recapture some of the joy of his younger years.

“Johanna really pared down the drugs,” Esta Kramer said. “At the end, he was taking very few.”

With a balanced diet and the ability to take a walk outdoors, Kramer stopped putting on weight, she said. The exercise allowed him to sleep better, which meant that he was happier and less anxious.

Wigg said that he spent a lot of time outside, watching the ocean. At least some of the art that Kramer loved was inspired by just this sort of natural beauty.

In fact, the work of Emily Nelligan, which he championed, consisted of charcoal drawings of Great Cranberry Island, just up the coast from the Vicarage.

Esta Kramer said she will make a donation in Kramer’s name to provide for a stone bench on a walkway that will extend from the Vicarage to the ocean’s edge.

It will allow others to enjoy a view that at times, it seemed, only Kramer could describe.

“He could really comment on the beauty of things,” said Cheryl Golek, a dementia care specialist at the Vicarage.

Staff members said that they will always remember the times when Hilton Kramer enlivened the Vicarage by the Sea with his wit and intellect.

“It was an honor to take care of him,” Eric Gillett said. “He was such a wonderful man.”

Even when Kramer was nonverbal, Esta Kramer said she could see indicators of his passion for learning.

“I think he was much more of a presence than some of the other residents,” she said. “He would be hanging out in the kitchen, watching them do things. The others would mostly be in chairs, watching television. He never, never watched television.”

“His affect all came back,” Wigg said. “Once he had a copy of one of his books, and he gave a seminar to (a staff member) on one of the chapters. His linguistic ability was just amazing.”

Kramer was fond of critiquing a book containing the work of Leonardo DaVinci.

He developed a particular rapport with Albert, another resident at the Vicarage, who shared Kramer’s New York roots. The two would sit on a couch at the Vicarage and chat, passing the time together.

Most of the world knows only that a a great intellectual has died. But for Esta Kramer, and the Vicarage staff, and residents like Albert, the void is more personal.